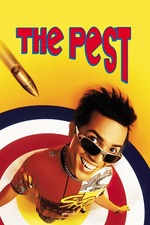 I've never seen The Pest in full, but I return to it's opening sequence all of the time. A powerful entity, it is, evoking such strong and strange feelings. Even beyond the racial caricatures or "problematic" nature, there's such a level of "cringe" to this that it's freeing, empowering. Every new identity we see John playing in the shower, each only seconds long, creates such intense embarrassment - for John Leguizamo, for us the viewer, for the culture that spawned a product like this, and for humanity itself. After such frantic, building embarrassment it reaches a breaking point and transcends, your body and mind exhausted, forcing reflection on the very notion of embarrassment - of cringe. What is it and why do we feel it? What about "cringe" makes it so prevalent in contemporary culture - one so afraid of embarrassment that it's people hide behind masks of "irony" to distance themselves from sincerity and thus identity. If it's "cringe" it's of their own "ironic" doing, self-aware - ownership of the cringe. But here in 2019 we're beyond this. John Leguizamo and R. Paul Miller killed cringe in 1997, in only a few minutes of cinematic glory. Can we finally be free to embrace ourselves? To forget about the potential embarrassment that comes with genuine personality? To destroy the cringe that keeps people trapped, ten layers of irony away from authentic connection? To dispose of the ironic identities we shuffle through like John in the shower, and reveal our true identity? The "pest" here is really the fear of "cringe" and the opening montage of this movie is high grade pesticide.