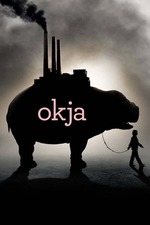 the "don't look back" scene.., so emotionally harrowing I drowned in my tears.. I cried whenever mija called out to okja it's such a pure friendship all those super pigs deserved a friend like that none of them deserved any of that I'm not just shakin my head I'm shaking my house and probably this entire planet yelling "they dESERVED BETTER" at the top of my voice on a wednesday night, nbd
also... the ALF.... like,, I'm an animal too... please take me away.. literally anywhere.. I just want to be in a truck with you good-looking people...
aLSO we can't forget about that mf who goes by the name 'jake gyllenhaal', I believe... It's already been stated AS A FACT, the guy can never give a bad performance, it's his DNA which we can't personally go and alter so,, we're just gonna have to live with the guy throwing his phenomenal performances at our damn FACES, film after film..
and AHN SEO-HYUN. if this movie is qualified for awards and shit I want to see her winning. she deserves them all. she was PHEN-OM-EN-AL