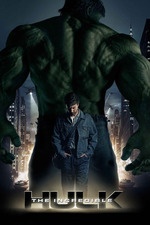 The Incredible Hulk is the most mediocre run of the mill film I have seen in quite a while, though I should mention that I don't think the film is bad by any means, it's just so uninspired.

I liked the fact they didn't make it an origin story as it made the beginning of the film a lot more tolerable. All the acting is solid, though none particularly stood out to me. The action scenes are all fine and directed fairly well, though there's no really fun moments until the ending fight.

In the end it's probably the most least interesting of all the Marvel films that are currently released. It suffers from being a bit too self serious, while also being very tame. Not bad, but not something I'll want to watch again.

War of the Worlds