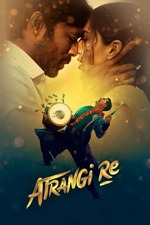 like zero an examination of another personality lost in abstractions in order to create something so fantastical that it seems to belong nowhere, or once did but not anymore — aanand l rai himself. reimagines all his pre-zero ventures (esp raanjhanaa) while succumbing to the same misery his previous films succumbed to — immoral actions, dialogue and progression. what is funny, or embarrassing, however, is how ppl seem to criticize the film for it's ableism, misogyny while being open to films that came before said ppl were conscious abt ableism, misogyny. ofc it's open to criticism but all the negative reviews here have the same energy as those obnoxious twitter threads and instagram posts that gives moral lessons abt what is right and isn't. a film where a psychiatrist goes, "im a psychiatrist, i know women" and ends up being wrong all the time, satirizing how ppl perceive mental illness and misogyny in general, is being despised for being “immoral”. do u want a man to make a film abt how women r being oppressed, already thinking he's in authority to talk abt women? nothing sounds more funnier.

might sound like an exaggeration but to me his films r important to bollywood, esp for its melodrama. not the melodrama of today — one that is used to “criticize” a films narratological and emotive structure and label those works as inferior to much more “serious” films but a melodrama that brings forward repressed feminine voices, creates emotive heights thru it's music and songs, has a potential to satirize religious bigotry in a way that ppl involved in this satirization don't rlly acknowledge abt their parody nor do ppl who r against that sorta bigotry, a melodrama that brings w moral polarity an antidote to dismantle that polarity. genius how the film also contains a sequence when akshay slits his wrist and alr does the exact melodrama that ppl criticize today inside a melodrama that ppl don't realize is a melodrama — the entire film. thoughts r scattered atm hence such confusing blurb of a “review” but in all honesty i do know this is no masterpiece. is it being misunderstood? perhaps. will it be considered good in years to come? i don't rlly think so. does it matter? no. at the end it does destabilize ur elite aesthetics that u interrelate w films hence u consider this to be a “bad” one for not having said aesthetics, so yk, it is aware of u and ur perception tw/ bollywood films, the reason why ppl didn't like adhm, jhms, lak2020, befikre, jthj and the list goes on...

the ramayana allegory that akshay mentions also subverts as ram never exists, raavana is morally good who is a mere spectator that waits while sita helps herself overcome her hurdles w/o any help.

reminds me a lot of lamhe — sara being both mother and daughter like sri devi, daughter sara being in love w a mental image of her mother's lover (anil kapoor, akshay kumar... ak/ak lmao) which makes me believe alr is on his way to make his kabhi kabhie p soon, or maybe that he is modern day yash chopra.