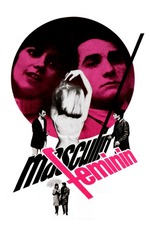 godard's most complex or simple, depending on how you choose see it. can be interpreted as a misogynistic rant if you see central characters as individuals, or as a critique of the amoral bourgeoisie left of the time (pertinent today and for generations to come) if you see central characters as society itself. a mess, almost like a stream of consciousness, rather than examining themes like many godard's work, this babbles abt class, consumerism, liberation, age, sexuality, gender roles, commodification of human life and passive society (then, and now). many misinterpret this claiming it to be misogynistic whereas godard is almost arguing here with societal structures, men and film critics (id go as far to include historians too) while discussing about commodification of culture (and woman). women are portrayed as commodity here, like in society, intentionally — as godard is criticising this idea itself, of how society sees women and how their dreams, wants, ideas and liberty are seen nothing more than a commodity with market value, tearing both their humanism and individuality. madeline's perspective, rather than being a woman's perspective, is how society see women as.

the entirety of the film displays paul's hypocrisy, absurdity of his idealism and uncertainty of his false romance. and its not only madeline who is detached from paul but paul himself is — quite decipherable by the 'interview' where madeline declares she thinks she is the center of the world while paul, like his false romance, gives an ideal answer which says nothing abt his character but the absurdity of an ideal mask he has put on in the name of revolution and more.

the film is less frustrating than all the ’reviews’ on this site that claim it is. gave me a headache when i read the reviews here which made me write this though i think it's been analysed sufficiently. people may or may not realize that calling a film that criticizes patriarchal structure and it's perception of women as misogynistic might be misogynistic itself