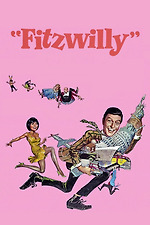 Okay. I think this is as close to a Mort Drucker film as I'll ever get, unless some lucky film-maker out there dearly wishes to impress me. If anyone put Fitzwilly and Fitzcarraldo in the same room together, the end result would shock the whole world and still be controversial centuries later. That's how magnanimous this movie's protagonist is: the most badass butler to ever grace an old lady's house's front door!

He really is a clever sunnava. Much of the film revolves solely around his masterminded plans that both service his own needs (read: money, impersonations, and the chance to call his employees "children") and aid his employer's. But even he has to deal with both his own human errors and, unluckily for him, the first woman to truly match his wit in daily observation and quick poker faces. I simply wish that director Mann focused more on the rivalry between these two characters instead of forcing a consummate romance comedy structure into the middle of the film. They should definitely form an interesting relationship, but their end coupling just doesn't work outside of the fact that they're both brilliant schemers.

In franchises like Lupin the III, for example, the femme fatale wants the treasure more than the man himself! I definitely think that, whether or not Juliet should act more like a Fujiko Mine-type character, the rom-com arc insert detracts from a great premise that has its base mainly in manic comedy, not just push-and-pull romance. A more complex turnout than "we're together, yay!" would have capped off an excellent story with panache and an awareness of the impossibility of their togetherness given their equal suspicions of each other.

That said, the dynamic between Fitzwilly and Juliet works because of Dick Van Dyke and Barbara Feldon, two actors who arrived on the big screen—coming from the littler screen of TV land—knowing exactly how to play their respective characters. I'll make another Lupin the III comparison and say that Fitzwilly is as close to the aforementioned master thief as I've yet seen in a feature-length film. Van Dyke's way with flattering accents, humorous body language, and punctual comedic timing lends him an authenticity for his role that few other actors could sport. I can say the same for the ways in which Feldon portrays a shady college student who gets into harm's way to successfully rat out whatever in wintery Hell Fitzwilly's been up to. Their double act sells itself and the whole story in turn; the supporting cast, not to be discounted, balances story presence with screen discreetness, both effective and as much in the background as it ought to.

Getting away from the crazy-cool cast, though, I've noticed other issues plaguing Fitzwilly the film. For example: how does Juliet enter the house once she's been kicked out? It's a matter of fact that she's more than capable enough to do whatever she can think of, but invading Fitzwilly's property never seems important to Mann, yet the whole movie's about devious trickery! Blast—I should have known it wouldn't all turn out perfect. There's no reason for the admittedly hilarious Christmas Eve department store mob sequence to go on longer than it should have, eventually exhausting some great gags and constantly repeating shots of a nervous Fitzwilly mulling about the first floor in his disguise. The film's already focused on a reasonably small-scale plot that chicanes in a needfully focused manner, so the editing must be botched or something. Well, I can't ask for too much in life or I'll probably end up making a movie based on a dictionary for illiterates! (Yes, that's a crucial part of the story too).

Fitzwilly's flaws stand out, of course, just as the worst musicians stand out in the world's best marching bands. What's here is solid, honest, cartoony fun. See that poster? Frank Frazetta drafted it. Hear that music? It's one of John William's earliest film scores, and he's credited in the opening credits under his father's own name. Quality shines like highlights in Juliet's eyes all throughout Fitzwilly, and it's an exceptionally accessible heist comedy that lives up to what its cast is capable of. I still think that, if he ever had the chance, Dick Van Dyke would have made for a pitch-perfect Lupin the III, and maybe another actress like Barbara Feldon could have become Fujiko Mine too. Until then, there's this—and Fitzcarraldo, though that's about rubber and this movie's about mutter.

Joe Bob sez check it out!