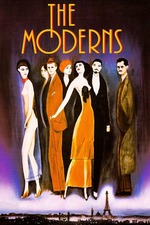 Keith Carradine has Katharine Hepburn's lips and a cool smirk, and he's the existential medium through which viewers experience such an unexpected film called The Moderns.

I'm going to be honest here: the main attraction for me was Wallace Shawn. It's a given that, if he's in a movie, it's at least got an off-kilter upper-middle-class professional bald man acting in it. But I was wrong—terribly wrong. The Moderns doesn't need Shawn's vehicle to sell itself on its own merits; plenty of characters like Oiseau populate the streets and inner circles ringing the ancient tree that is Paris. Director Rudolph slices open a particular moment in world history and wraps his film across the city's manifold and all-telling individuals, starting out with what was then modern and concluding his absurd epic with a meditation on the oncoming of transaesthetics—how art itself becomes irrelevant in a world where all the rules cease to exist. When everyone becomes equal at the end of the movie, there's a lack of conflict and a grand dearth of restriction, and both Oiseau and the Harts can move to Hollywood and live amidst star propaganda.

Did that paragraph seem confusing? I'm not sure—I mean, it summarizes in an instant how relevant and alluring the story of The Moderns still is. Rudolph has a reputation for tackling more conventional subject matter and transforming it through his mixed directorial style (which bears the influence of greats like Altman (based on similar themes and open-ended conversations), Roeg (based on rampant sex and seductive imagery), and Graeme Clifford (based on Rudolph's haphazard editing). But only The Moderns seems to clot up all of the aforementioned building blocks and use them in an increasingly daring way. There's so much packed into this story of a passive artist's moral wanderings through the Lost Generation of Paris that, if I were a film scholar with a sworn duty to write on the movie, I'd not hesitate to do so! It's just that, well, I'm not employed in that line of work and, like how Nick Hart sells cartoons to Oiseau's newspaper on a part-time basis, analyzing the formalistic aspects of a film is secondary to the act of reviewing.

The term "reviewing" implies taking a second look at an art-work to understand what went screwy, how the malcontent gets fixed, and why it still holds up. Case in point: Rudolph's direction lets moments wander at a lax pace, and this sometimes makes the visuals seem repetitive and uninteresting. During most of the conversations throughout the film, for example, he employs a constant, creeping zoom-in that almost makes each conversation feel like a horror movie. This gets old quite quickly and, even though later sequences in the story remind me of clips from Cocteau films, there's an inconsistency at play that renders some moments a little too stale. The biggest problem I see with The Moderns isn't related to visuals at all, though. Its script pushes most of the major plot elements to the third act without compensating with more interesting activities in earlier acts. What happens is that redundant information appears in that third act when it should have been prefigured in earlier ones—for example, the reappearance of old friends outside the art museum that I feel is a waste of runtime.

This also affects the central conceit of post-modern art acting as empty vessels for power: the moment at which Nick realizes his own forgeries are shipping to an art museum overseas as the real deal, the story should start transitioning away from modernism and into post-modernism, where moral no longer matter and the only winning team is the one that destroys other influences. There's a whole bunch of loose matter in the film that either provides a welcome break from the evolving twists and turns of Hart's involvement with the philistine Betrand Stone or, simply put, feels like detritus put into a film that doesn't need it. While Hemingway's humorous anecdotes provide connective tissue between sub-plots and the main story at hand, a brief move away from the smoky Parisian cafe towards a seedy biker bar from a few decades later—easily the most surreal moment in The Moderns—doesn't say anything new about Hart's journey. In a film where universal relationships escape their modernist trappings of moral euphemisms and complacent misinformation, ultimately allowing each party involved to stick with war or break away from their straining ties, the mere act of replacing the "real" version with the supposed copy says enough.

So The Moderns suffers from arbitrary scenes and dialogues that repeat information otherwise inferred, left up to interpretation, or simply shown in audiovisual form. But the basics of film-making never stop giving in this increasingly-complex costume film. Toyomichi Kurita's cinematography stars front and center, balancing the visibility of the cast's excellent-to-superlative performances with the needs of Rudolph's poetic realism. I've seen so many great moments in this film and, yet, it's the quieter moments of Hart painting in his studio, or simply seeing certain characters through their mirror reflections in long-zoom, that pose metaphorical questions and/or statements about each character. Rudolph's Paris feels claustrophobic, asphyxiated by smoke and rendered in a creeping zoom that evokes both Roeg and Kurosawa (a fitting mixture of Western direction with Eastern cinematography!). Opulence arrives into these misty corridors and table-spaces via luscious production design; indeed, there's some great costuming and usage of art-pieces all-throughout to clothe each character in visages that make them feel comfortable in tight circumstances. Even the musical score by Mark Isham, a regular collaborator with Rudolph, reflects both the chordal diversity of contemporary jazz and its ties to more recent musical styles, like Peter Gabriel's percussive alt-rock and turn-of-the-'90s new age stylings.

Nothing feels out of place in The Moderns despite how anachronistic the music is, or how contradictory the costumes seem against the people they hide beneath, or—well, actually, the cinematography fits darn well. I'd have to slap myself if I said otherwise! It's just that Rudolph's direction not only strives for stylistic ambition, but often overextends itself in the name of realizing his dream of artistic revolution. Perhaps the most striking evidence of his disdain for balancing ideas with execution is the way he shifts from color to monochrome when matching new footage with older stock footage. This kind of color-grading transition between sequences works right from the start as a way to convey the lack of vibrancy in a modern society; it soon drops out of the movie in an uneven manner, and I wish that Rudolph could have found the courage to apply it even further. All that said, I've done my best to collect my thoughts on text. The community around me can do the rest.