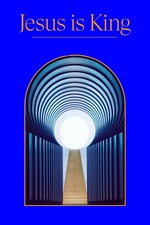 JESUS IS KING is now out!

For what this short film is, it was shot beautifully. A majority of the shots were filmed through a sort of "fish-eye" effect, as Kanye and the Sunday Service have done before primarily in their Coachella performance. However, the film really captured the Sunday Service Choir and not so much on Kanye which I thought was interesting considering Kanye has always been one with a giant ego and always wants to be the shown off.

Through the numerous listens of the album already and now seeing the IMAX film, I have started to realize what this album really means. It isn't really supposed to be an album for us fans of Kanye. While of course it is definitely for us to enjoy and take part in Kanye's pivotal moment in finding faith in God, I think the music and film serve more for him and his love and acceptance of God. Even Ye has spoken how everything he does now is for God and not for others. By placing his faith in God, he is striving not only to become the best version of himself, he is also striving to be the best role model for others especially his children.

Was the film necessary? No. Did I enjoy what I saw? Of course I did, I love any and everything that has to do with Kanye, and I especially love how Kanye has evolved with finding the Sunday Service choir and finding God once again.

Also, the film had ended with Kanye singing "Street Lights" which happens to be one of my all time favorite songs of his so that is a big plus for me.

If you love Kanye and want to see more when it comes to Jesus is King and the Sunday Service Group as well as watch a 35 minute film that has tons of "eye candy" then go see it wherever it is closest to you.