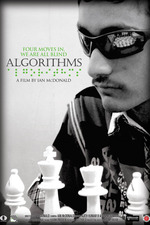 One great childhood memory of mine is when I got a Harry Potter Wizard Chess set for Christmas, back in '01 or '02. Yet I didn't get it for the stimulating and intellect-building qualities of the well-known strategy game; I got it because I was a victim of a terrible condition, known as 'Potter-madness'. To this day, I have never played chess, nor will I in the foreseeable future. So when I was invited to an event at the Tyneside Cinema where a documentary about blind Indian boys playing chess was screening with a Q&A, I (like many others will unfortunately be) wasn't exactly chomping at the bit to see it. Algorithms has made me look like a right fool when it turned out to be one of the most pleasant surprises of the year.

Making a documentary about such a dry, narrow subject is a risk that jack-of-all-trades director Ian McDonald takes in nearly alienating his audience, but it just proves that if you invest enough passion and love in the subject you're filming, then you could be forgiven for having an intensely obscure pitch for your film. Algorithms is a sensitive look at the lives of three boys, all stricken with debilitating blindness at early ages, and their competing to become chess champions. McDonald selects his areas of focus with precision and taste, skirting around stereotype skilfully.

Ordinarily, the cocky victor is positioned as the antagonist in documentaries, but when McDonald tells the stories of high-flying Sai Krishna and underdog Darpan alongside one another, neither favouritising nor sullying either, he treats them as equals; a type of blind Apollo Creed and Rocky Balboa in any of the Rocky sequels. The third protagonist, Anant, perhaps leads the bravest story strand, not least of all because of its unrelenting honesty, with one emotionally-brutal scene and another certain conclusion truly shocking the viewer.

In this respect, Algorithms is also a wonderfully structured film, segueing in between the characters and, later, into the psyche of their very own Burgess Meredith, Charudatta Jadhav, which is surprisingly where the film finds its real heart. Algorithms rarely holds a melancholic mood alongside a hopeful one, but it performs a fine tonal juggling act to take the audience on an unexpectedly compelling journey.

As well as emotionally satisfying with a series of fearless interviews, the film is also aesthetically pleasing, using a defined and unique type of 'candid camera'. The camera quite literally finds its first focus on a curled-up hand on a chess piece, and from here, the film sticks to its tactile origins. Although the games themselves are peppered frequently throughout the film, they're rarely dull, edited with precision and intensity, regarding the nuances of the eccentric players with as much attention as the pieces themselves. McDonald alternates between painfully-long takes to extend the tension and rapid editing to match the pace of the passionate score by local Indian composer, Prasanna. Occasionally, this score is a little too clichéd within its intensely-cultured setting, and the black-and-white photography can feel a tad obvious, but there is a lot of logic and sophisticated intention in the textbook visuals.

Although episodic to a fault (where the transitions are all as flat as a pancake), Algorithms is a composite film of many well- explored real-life characters whose stories earn their 100 minutes of screentime. A true one-off (I doubt there will ever be an indie fiction-film about blind chess players, let alone another documentary), it's a herald for a small, unsung group among billions of lives who really need a shout-out.