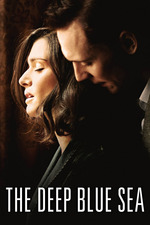 The Deep Blue Sea is like a half-remembered dream, or a film watched under the influence of intense pills to dope you up to cure insomnia. Terrence Davies' adaptation of Terrence Rattigan's play simultaneously grips and bores in its soft-focused stylisations of the death knell of the archetypal 50s fling, in which Rachel Weisz's subdued wife embarks on an affair with dashing but troubled RAF pilot, Freddie, played with Tom Hiddleston's trademark serpentine charm. The result is a fleeting film that only affords the audience the essence of the characters and their psyches, to varying degrees of success.

Shot in the bluest, smokiest of hues, each scene takes place in a fever dream-like haze, and the disorientating structure bumps scenes into one another like a drunken recollection of your most regretful memories. This choppy selection is as brave as it is detrimental; because of it, the film never really takes off or reaches a point where it grabs you in a choke-hold. Instead, the characters sputter across their arcs with increasingly nebulous motivations and before you know it, the opening mirrors with the ending in one of the strangest 'conclusions' I've ever seen.

Davies' adaptation takes a little away from the calibre of the actors here, with all three leads becoming a tad muted underneath the director's suffocating pace and visuals. Rachel Weisz is a fine actress, and she gives a fragile performance of understated pride and vulnerability as the conflicted Hester, but there's never enough time to get under her skin, as too much time is spent with her inertly recovering from an early suicide attempt and considering whether to stay with her husband or her lover. Tom Hiddleston fares better with a role as volatile and unpredictable as his intermittent presence in the film, but it's Simon Russell Beale that really fights through the misty interiors of 50s Britain. A reserved performance of simmering anger, later regret and puppy-dog sympathy, he's the film's anchor while Hiddleston's and Weisz's characters are up in the air.