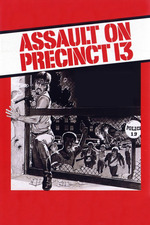 "When you're in my position days are like women. Each one is so goddam precious and they always end up leaving you" - Prisoner Napoleon Wilson

Anderson, California. A Los Angeles ghetto. 3:10am. A local gang called Street Thunder steals a large cache of automatic weapons, but six are killed by the LAPD. The leaders of the gang swear a blood oath for revenge. Lieutenant Bishop is starting his first shift after a promotion. He is tasked with heading a defunct precinct overnight in it's last day of operation. A bus full of convicts on it's way to jail is forced to stop here and then a father running for help after an act of vigilante justice against the Street Thunder appears at the front desk as well. Thus begins an assault on the precinct from one of the most dangerous gangs in the country equipped with silenced machine guns. A precinct with no electricity and no communication with the outside world. Surrounded by a quarter mile of abandoned buildings and no human life.

Before Halloween, John Carpenter was the writer, director, editor, and composer of "Assault on Precinct 13." He was the man, and the film was exactly what he wanted it to be on the shoestring budget afforded to him. The film started with what was my least favorite opening theme song from Carpenter thus far, BUT it's used often and within the first thirty minutes it grew on me. A sign of a great score. The man strikes again. All of the main cast deliver great performances but Darwin Joston's Napoleon Wilson was my favorite. The feared convict with a backstory that leads you to believe there's more to the truth than you know.

The writing is superb as it delivers a constant sense of impending doom from the second act on. I had no idea that this film was inspired by the legendary films "Rio Bravo" and "Night of the Living Dead" but it makes perfect sense in hindsight. Carpenter always wanted to direct a Western but never had the opportunity so he used many of the genre's elements in his horror and action films. After this most recent rewatch I can't help but think the siege concept made famous by these films was the inspiration for the cabin assault in the classic video game "Resident Evil 4" as well. If you've play it you get it. Very cool.

Carpenter uses a great plot device that is guaranteed to make most people hate the antagonists and want them dead by any means. After that event even this ridiculously unbelievable gang becomes the personification of despicable. At the time it was considered controversial but it was absolutely brilliant in pushing boundaries to garner attention. The only gangs on film more far fetched than this one are the ones from "The Warriors." but none of them could ever be perceived on this level of evil.

The actual building under assault is Precinct 9, Division 13. So technically the film should be called Assault on Precinct 9. Although I wish this film had an extra thirty minutes to deliver some backstory and pad proper reasoning for the assault in more definite fashion, I still love the final product. I don't care whether it's precinct 9 or 13, this film is a 4 star banger all day. Pure Carpenter excellence. Get that man a smoke for fucks sake!