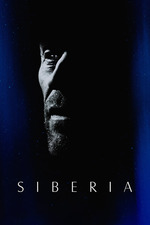 Willem Dafoe is isolated in a distant place with another man. Except this time it's not Robert Pattison but himself - or his brother. But soon delirium, alcohol and paranoia settle in and quite literally away we go.

From there, "Siberia" is up for anything in what has the strange taste of a testament film by a man looking back at his life and the many failures from it. The film mixes many different registers, some familiar to Ferrara and others not so much (there's even a brief "Tree of Life" cosmic moment). As with much in his filmography, the more physical the sequences the more in point they seem to be in letting us empathize with his character. The more openly abstract/metaphoric often feel less powerful and some are borderline cringe-inducing in the use of women's bodies and "otherness" as springboards for the character's musings and confusion.

Somewhere between Denis' L'intrus (a film with which it shares many images) and Skolimowski's Essential Killing, up until the very end Siberia does not shy away from throwing punches at the audience's "good taste" (some laughs in the press screening of course let us know much more about the press limitations than the film itself) - which is the utmost Ferrarian way to go.

All the Dead Ones