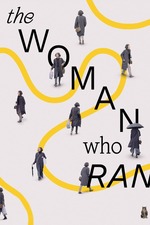 The Woman Who Ran

Which woman is running? From where and to where? There could be a simple answer since Kim Minhee's character who serves almost as the guide for the film as she moves around being away from her husband for a few days for the first time in years. But on her "girl's day out" she will meet other women who might also be running even if they are standing still in their spaces (men are almost completely absent - or it would be more exact, they are present always but only as antagonists in very short spurts but mostly as an ever present memory).

The film uses some of the expected Hong visual and narrative motifs of course, but they feel specially fresh for instance as zoom ins approach animals instead of humans or CCTV images creating an almost DePalma feeling to certain moments. Also the multiple storylines flow in a much more direct way, which makes the accumulation impactful in a specially calm and poetic way.

Mysterious and complex as usual in Hong exploration of the human dilemmas, this new film feels particularly light in terms of tone, which as usual is very much a surface-level first response since there's so much simmering in each character and specially in their relationships that we only get very small clues that resonate deeply.

And we did get an open scene applause for a cat. That's always a plus.