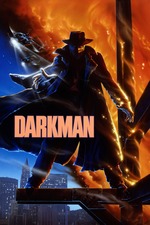 I hadn’t heard much about Darkman before picking it up, only knowing the bare minimum: it was a Sam Raimi film. That was all I needed to know, and not before long, Darkman deftly found its way inside my blu-ray player with an eager Raimi film excited to hit play.

After noticing the director’s name, my expectations shot sky high. Ever since I was a kid religiously watching his Spider-Man films, I’ve loved Sam Raimi. His youthful, flamboyant, and earnest portrayal of Spider-Man was a huge influence on me growing up and likely formed me into the person I am today (for better or for worse). Growing up as a shy and nerdy kid, Peter Parker’s life was all too familiar. Sam Raimi’s earnest but cheesy tone fit Spider-Man like a glove, and gave me lots of confidence as I witnessed Peter Parker’s relentless courage to fight for what he believed in. Sam Raimi’s Spider-Man trilogy were more than just films; they were reminders I wasn’t alone and reminders of how important it is to always be your best self.

Later in life I got around to Sam Raimi’s Evil Dead trilogy, and was deeply impressed with the amount of technical prowess Raimi had even at the start of his career. His first Evil Dead film has more energy than you’ll see in the average low-budget horror flick, and Evil Dead 2 is nothing short of a masterpiece. Army of Darkness is great as well, being one of the rare instances where the 3rd film of the trilogy is good (a trait not carried over into the Spider-Man trilogy, sadly). All that said, you can imagine how high my expectations were for Darkman.

Expectations that were completely, unquestionably met.

Darkman is so positively Sam Raimi. Every one of his trademarks is here: the cheesy, borderline melodramatic tone; the multitude of impressive camera movements; the likable, charismatic protagonist; the simple but effective story; and a villain who’s ripped straight out of a comic book.

That’s a good way to summarize the film as a whole, actually: Darkman is ripped straight out of a comic. Its characters are simplistic, but fit the type of film Sam Raimi is trying to make. Darkman isn’t trying to be anything complex or challenging, like you’d see in Christopher Nolan’s Batman trilogy for instance. Instead, Darkman is striving to be a lighthearted throwback to an earlier time. It’s a throwback to the simple comics of the 1940’s: when heroes were out for justice and villains were out to look down on the world and twirl their mustaches. Darkman is exceptionally black-and-white, and it’s that simple approach that makes the film so entertaining. Darkman is as pulp as pulp gets.

Entertaining as it is, this approach does come with some faults. The lack of complexity sadly prevents the film from sticking in my mind the same way Spider-Man and Spider-Man 2 do. Although those films get a bad wrap for being basic in structure there’s a lot more going on in those films than what we see in Darkman.

This film never goes beyond the simple revenge story of a brilliant scientist getting revenge on the mobsters who disfigured him, all while trying to hold on to his humanity. It’s not exactly the most unique film ever crafted (there are probably thousands of revenge thrillers from the 1970’s about people-turned-vigilantes seeking retaliation towards criminals. Not to mention thousands of revenge thrillers Liam Neeson would go on to star in after this one). If someone were to judge the film purely on a narrative level, I could see them coming away disappointed.

But I’d argue that Darkman isn’t something that should be judged just on its narrative. That’s a cheap way to judge a film, the way I see it, as there’s more to films than just the story. Films are about visuals, they’re about emotions. Liam Neeson’s Dr. Westlake character may not be the most dynamic protagonist ever seen in film, but we are able to understand his character enough for us to be invested in his arc. Sam Raimi gets across his anguish, his thirst for vengeance, and his reluctant plunge into madness with visuals alone. It’s those visuals and the energetic, playful tone that makes Darkman something remarkable.

It’s not Shakespeare. Its narrative is simple, almost to a fault. But that also allows the dynamic filmmaking techniques Raimi to stick out as well as they do. This film bursts from the seams with personality. Darkman may not be the most important film ever made, but you get the impression that Sam Raimi believed it was when he was filming.

Besides the director, I think some praise should go towards Liam Neeson who gives a genuinely great performance. This was one of his first film roles, and you can tell because he actually emotes, something that’s rare for Neeson. He captures very well the tragedy of the character, and gives this film more depth than what’s in the screenplay. Frances McDormand is also fantastic, as to be expected with her. My only complaint is that I wish they gave her more to do. McDormand’s role is mostly limited to just being Darkman’s emotional core, and it’s sad they didn’t make better use of such a great actress.

Something else worth pointing out: the stellar production design. The sets feel so tangible and real compared to superhero films as of late, the majority of which excessively utilize cheap-looking green-screen. Physical sets are extremely important in the superhero genre, as it gives the otherworldly heroes something real to contrast them with. The heroes feel more real when they interact with real objects, and nothing gets that across better than Darkman’s climax which is so wild and crazy I was constantly thinking the whole time, “How did they film that?!?” A question I find myself asking less and less as more blockbusters come out.

I don’t want to spoil too much, but let’s just say you haven’t experienced an action scene until you’ve seen an actual real stuntman hanging off a helicopter flying through the sky. My jaw wasn’t only on the floor, it was halfway to China.

Few directors are able to capture the stark, dynamic pages of a comic book like Sam Raimi can. Images pop in spectacular ways. For as stylistic and fun as Darkman is, the film never forgets that it’s a tragedy. Every scene is drenched in this melancholy mood that is accentuated even further by Danny Elfman’s superb, operatic score. The filmmaker’s decision to frame a superhero story in this way gives this movie a unique identity and makes me crave for a world where superhero films felt as personality-filled as this. In a world where every big blockbuster feels pedestrian and uninspired, it was fun to pop this in and get 96 minutes of unadulterated, cheesy fun.

A youthful, flamboyant energy can be found in everything Sam Raimi has ever made, and that energy is here in full force with 1990’s Darkman.