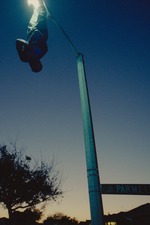 Finally got around to seeing the short film that accompanies Kendrick Lamar's fantastic album of the same name, and I thought it was great. A wistful set of memories in Compton/Bompton from countless different nameless perspectives, all unified by Kendrick's vision of his hometown.

I've loved this man's music for a good while now, but he's somebody that even though I've loved nearly everything I've heard from him, I've had a hard time really understanding why it is I connect with his work so much aside from finding his stuff catchy or hard hitting on a surface level.

There's this interview with Kendrick/expose on Bompton where they discuss how he grew up surrounded by gangs and violence and how that's affected his art, along with trying to shed light on what's actually happening in the Blood-occupied territory of Compton. All throughout, Kendrick remained so understanding, so forgiving, and above all, empathetic.

Although his music most certainly telegraphs a lot of his fears and anxieties, along with the overall horrors that have come out of his hometown, it is all unified with the idea that we can all become better human beings, and that sometimes through art, we can make ourselves realize new things about the lives we lead and the people around us. That's why Kendrick embodies so many different characters and perspectives in his music, it's so he can better understand and empathize with the people outside of himself, while simultaneously trying to figure out who he is as an individual.

While a lot of what Kendrick sings about may not directly apply to me, the core of his work and what it is he's trying to accomplish connects with me in ways that few other artists could ever dream of. It is utterly astounding to me that this Pulitzer Prize winning artist, a multimillion dollar cultural figurehead, and one of the most celebrated musicians of our generation still remains so humble and is always willing to look deeper at why we as people are the way that we are, and how we can change for the better.

This was admittedly a pretty big ramble, but Kendrick is an artist that is still to this day making me re-evaluate his work, along with my own worldview, and I honestly don't think I'll ever be able to fully grasp everything about his work that I love so much.