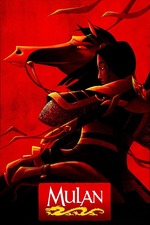 So I had this one just kinda on in the background for a minute as I was doing other things... and then I just got sucked in and had to finish it. This is probably like the millionth time I’ve seen it since I was a child, but yeah, this movie is easily one of Disney’s best.

- The music, the pacing, the animation, the characters, even a lot of the over-the-top Disney kids humor actually works a large majority of the time here.
- Reflection is one of the prettiest songs out of any Disney movie, you can fight me on this.
- I’ll Make a Man Out of You is an absolute BANGER. If you do not get at least a little pumped up during that song, I do not think you are human.
- The scene on the mountain easily has some of the best craft out of any Disney movie period.
- I totally forgot that A Girl We’re Fighting For (which is easily the stupidest song in the movie) literally gets interrupted by the scene where they come across that utterly desecrated village that may or may not have made me come to terms with my own mortality at the age of 8.

I miss when the formulas for making these movies wasn’t all that these movies were. Movies like Mulan are artistic, character-driven, and lively works of animation with extremely memorable renditions of these characters and loads of personality to spare. While I’m glad Disney has kept their more creative and original side alive with their modern day 3D animated films, a part of me still misses films like this one that were made during their Renaissance. Holds up just as well as it did when I was a kid.

Also I’m really sad that the remake is apparently not very good because I think this film could honestly lend itself really well to live action in a cinematic sense, minus the talking Eddie Murphy Komodo dragon stuff.