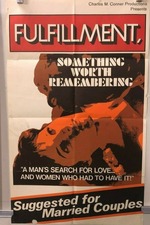 Fulfillment, Something Worth Remembering

Fulfillment, Something Worth Remembering 1969 ★

If you were to turn ALL THAT HEAVEN ALLOWS upside down and shake it until everything of value had fallen out and only the suds remained, the result would look something like this Texas-shot tearjerker from one-and-done auteur Charles M. Conner. In other words, it’s not very fulfilling and it’s hardly worth remembering, but I'll give Conner some credit for trying to be Houston's Douglas Sirk instead of just going the usual horror-exploitation route. Vietnam vet Johnny West returns home to Ermaville, a Texas oil town, to study classical piano at the local university and marry his high school sweetheart, Kay. To help pay for her extravagant spending sprees, Johnny forms a rock ’n’ roll band, Johnny West and the Wildcats, and starts doing small gigs (The Wildcats was a real Houston-based garage band also heard in NIGHT FRIGHT). While Johnny and the Wildcats are away, Kay starts to play with wealthy older oil man Peter van Carter. After the two philanderers kill themselves in a DWI accident during one of their trysts, Johnny hits the bottle and abandons his plans to be a concert pianist until he meets Mrs. Patricia van Carter, the attractive middle-aged widow of the dead oil guy. They fall in love, marry in Mexico, and honeymoon in Spain before the inevitable cancer diagnosis. There's also an attempt by Patricia's jailbait daughter Jessica to frame Johnny for murder after he spurns her sleazy advances. The FULFILLMENT part of the title was tacked on along with a softcore sex scene in the opening reel to try and find some audience for this thing. I doubt anyone who was lured in by the sexy ads and MPAA-assigned X rating was impressed with the film’s dramatic centerpiece: a 20-minute dinner party conversation about the rules of love.

Temple of is using Letterboxd to share film reviews and lists with friends. Join here.

Is There Sex After Marriage

A Matter of Wife... and Death