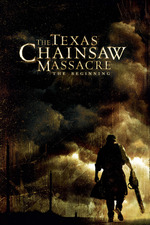 The Texas Chainsaw Massacre: The Beginning 2006 ★

This was the first in the series I’d never seen before. When the remake came out, like a lot of people who loved and cherished the original, I hated it and wrote it off as worthless; as such, I never saw this prequel to a movie I hated, and subsequently wrote off the other movies that have come since as cheap cash-ins of assumingly the same quality. But, after rewatching the 2003 version of Texas Chainsaw Massacre and finding it much more palatable than before, I was intrigued to see how this would actually be. Turns out maybe I was right after all.

So, first of all, pretty fuckin’ unfortunate that they throw around the r*tard slur and a lot of anti-disability sentiments in this movie. I get that this takes place in the 70s and that was the norm back then, but there are a million euphemisms you could use to refer to mental disability that were also around back then, so there’s really excuse for the heavy usage here.

Second of all, it’s usually not a good sign when the things you like about a movie don’t show up again in the sequel. In this case, the only person involved with the 1974 original or the 2003 remake that I really liked and who makes a significant comeback here was R. Lee Ermy, who returns as Sheriff Hoyt and once again does a really great job of being enjoyably loathsome. Everyone else though? Either gone or doesn’t seem to be contributing. Hooper and Henkel come back as producers but seem drowned out by the no less than four other producers they have to work with, Pearl doesn’t return to do the cinematography like he did the remake, John Larroquette only comes back to do a minor ending narration (which feels so perfunctory that it might as well not exist), Steve Jablonsky does the score again but it just sounds like rehashing their precious movie’s score, even the Blair Meat factory seems to be a totally different company here (contradicting the setup in this movie of this part of Texas being a dying town). It’s like they saw the visceral negative reaction to the remake and deciding to abandon almost everything about it while continuing along that worldbuilding. So bizarre, and honestly is just one of many reasons why this sucks.

The other reasons are the original ideas for this outing. None of the characters are particularly interesting, which was mostly true for the remake too, but at least Biel was fun to follow along with. Jordana Brewster just doesn’t have that same engagement, and she just kind of meanders around a lot; weirdly, the two boys become a focus during the movie, but they and their conflict regarding the Vietnam War are both hugely underwhelming. Diora Baird contributes nothing to this movie and I’m pretty sure she was cast specifically for that shot where she takes the jersey off. As for the Hewitt family, the filmmakers try to develop them more yet also don’t. Like, we see why they start killing and eating people, but there’s hardly any reasoning behind it. We see one of the sidebar characters aligned with the Hewitts from the remake return, but learn nothing about why they’re friendly with the Hewitts. They add more for these characters, but for no particularly good reason.

This theme just seems to permeate the whole movie. The story always feels so unnecessary, and nothing that they do to set up how things are in the 2003 movie feels like it has any purpose or raison d’etre. From the very beginning, it’s a movie With a story that doesn’t need to be told - when you get to the ending, it’s a movie where the conclusion affirms that nothing matters. Makes perfect sense why that third movie in this remake series never got made; what reason does this one give us to care?