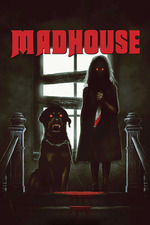 severely underrated! uncommonly precise for italo-horror, certainly with a lurching and stumbling narrative arc but assured and deliberate in its psychology to a genuinely surprising degree. an abusive, quasi-incestuous sibling relationship, long dormant, resurfaces as one sister decays and the other devotes her life to care: hardly novel but still a canny spin to have such a well-developed sense of the conflict between sisters as fundamentally both inter- and intrapsychic, each sister warring with the fragmentary other within their own consciousness as much as they grapple with the real one. she lives in a funeral parlor and her birthday is attended exclusively by the sick and dead, a series of gothic flourishes ornate and grimly comic building to an ending without catharsis or admonition. everyone is dead, She killed them, "[she]'ll never be free", hooray, happy birthday. R I P murder puppy.

"i feel what she feels. i know what she knows. to some extent, i am what she is"
//
"you can't make me well, but i can make you into a pretty good imitation of me....twins again, twins again"