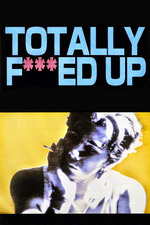 Viewed as a series of formal gestures, Totally Fucked Up is clearly impressive: I particularly appreciate the way Araki frames his teenage solipsists as they laze about, filling the entire frame with their beds, making the site of their apathy seem almost inescapable, or the decision to dwarf the characters with neon signage in almost every scene filmed outside, the monstrous, unintelligible fragments of capital pervading every inch of the city. The issue, then, is that I think he hews closer to queer miserabilism than I would like, with that ending in particular leaving a bit of a sour taste. In his best work, Araki turns the tragedy of post-AIDS queer youth into grand, almost joyous surrealism, and yet the film (again, most prominently in its ending) has a bit too much of the flavour of prestige queer melodrama.