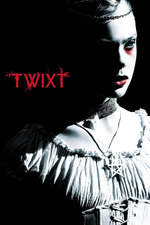 daylight’s fashionable glossy hyperreality is transformed into near-monochrome gothic fantasia at night. radical discontinuties of time, running too fast and too much and yet frozen by grief. Coppola exorcises the ghosts which narrative forms silence and brick over; the ground we stand on is revealed to be nothing but tombstones (Edgar Allan Poe stayed there once, didn’t you know?). abrasive juxtaposition (spatial, temporal, and tonal) tears at the insides of a tired genre exercise until it’s as bleeding and battered as the innocence it exploits, only to finally put a stake through its own still-beating heart. the most immolating horror film of the decade, convinced none of us have grappled with this nearly enough

“you are the ending you seek”