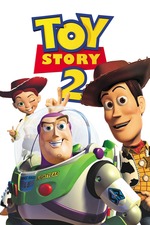 If Toy Story is The Godfather of 3D-animated features, then Toy Story 2 is just like Part II in that they are the separated twins: alike in quality, delayed only by necessity, and just as revered as their predecessors.

The original Toy Story and Godfather pulled off the franchise double-play that film producers pleasure themselves to. Simultaneously did they introduce a style of storytelling that is absolutely unlike anything before it, but they did it with clearly-drawn, instantly-iconic characters and a sense that the first film was all that they could pack into one serving. Each are bursting at the seams with potential, not that they should be hooked up to a machine and sucked dry, but the stories these first films chose to tell were merely table-setting, easing you into an intimidating and fascinating new world.

The Godfather of course, was adapted from an excellent novel that already had two films-worth of material ready to go. Toy Story 2 is straight from the horse's mouth: a confident, polished, and extremely-busy sequel with plenty more existential quandaries for its toys to wallow in. The best part is that it's hardly indulgent; it's only 11 minutes longer than the first film, which looks humble in comparison.

Sure, it may fall victim to the eventual kind of bombast that befalls once-meek studio franchises (fast-paced airport tarmac climax, anyone?), but does it overstay its welcome? Are any of the new additions to its cast token, or shoe-horned in to attract a different demographic? Are any of its emotional beats unearned, especially that one scene, a scene which would fall flat in nearly any other film?

Of course it doesn't, because as much as Toy Story 2 concerns itself with the wild world outside of Andy's bedroom, it's still functioning on its preoccupations with change. For as much as the original is concerned with Andy's room being a constant culture for new plastic interests, Toy Story 2 wonders what happens when outside parties play such a role. How will these toys react when they are forced to play political prisoners, representing the corporate interests of childhood instead of its anarchic purity? Who among them was built to sit around in a glass case and appreciate?

The genius of this series is in how it applies humanistic concepts to incredibly specific children's entertainment. There are aspects of our daily lives that are heading the way of the childhood toy. They are being boxed up and preserved for posterity. They are meant to be pictures of a bygone era, not what they were originally manufactured to do. They are being replaced by whatever is newer, cheaper, and more plentiful. Toy Story 2 wants to know, where is the line? At what point are we simply preserving the past for hollow sincerity, motivated by capitalism? Have we even thought about how our old objects can work with the new, or have we convinced ourselves of the steadfast notion that progress = replacement? It's funny, these questions have already kind of been answered by its predecessor, but here, it feels just as fresh as before, and it goes even farther.