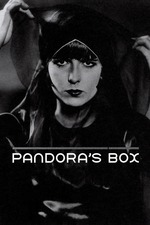 I had no idea this literally ended with Louise Brooks' iconic Lulu getting literally murdered by literal Jack the Ripper?! What!!!

Pandora's Box has long been one of my biggest silent blindspots, and it did not disappoint. Brooks is phenomenal, of course, luminous and ethereal and inevitably tragic. She's surrounded by a host of good performances too, from Francis Lederer, Carl Goetz, Fritz Kortner, Gustav Diessl, and Alice Roberts. It looks incredible too, which shouldn't be a surprise considering it's directed by G. W. Pabst. I think it's also fascinating how this is a film that could easily be seen as more than a bit misogynistic in how profoundly Lulu fucks things up for the people around her, but more than anything, I found the film almost mournful in its look at how dark and callous the world can be? Like even Literal Jack the Ripper is treated with compassion. It's not a traditionally romantic movie, but it does seem to have some kind of overarching love for mankind in spite of our cruelty. I don't know! Lots of thoughts.

I worry I didn't give this quite as much attention as it required, so I'll stop this review here for now, since I'll probably write more at length about it down the road, but I'm definitely taken with it on first viewing.