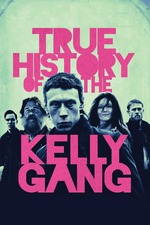 True History of the Kelly Gang

I was interested in seeing this film because of the director Justin Kurzel. He's made some incredibly powerful films such as Snowtown and his visual style is so unique. I was also interested to see how he would treat the story of Ned Kelly.

The film, based on the book of the same name by Peter Carey, follows Ned Kelly (George MacKay), as he grows up to become the outlaw that fought back against the British.

Though unnecessary slow in a lot of scenes, this film was very well written. It isn't wholly accurate to what happened, instead choosing to treat the events as a sort of legend or myth which is interesting in this context. Characters, especially Ned himself, are written well. There's a sparse but effective voiceover used throughout the film which is Ned writing his thoughts to unborn child. The end is emotional and really well done.

Director Kurzel's eye for stunning visuals is once again on full display here. A particularly memorable scene is the night-time showdown as the inn which is lit predominantly by torches. It is tense and cleverly shot.