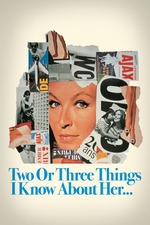 2 or 3 Things I Know About Her

The evolution of Godard from passionate filmmaker to serious artist has made a tremendously sized step forward. 2 or 3 Things I Know About Her is marginally better than its thematic predecessor Une Femme Marriée. Unlike Godard's tendency to become obsessed with the pulp culture of America and its destructive fundamentalisms - such as capitalism and the illogical logic of war - which resulted in a notorious detriment of his cinematic quality, he alternatively began to portray the impacts of these political, governmental and artistic ideas and tendencies of a progressively changing society in real people. The first step to achieve, ergo, is to construct human characters.

Once this step was achieved, then the environment is the next thing constructed. Here is where the term "Her" in the movie title enters the stage. "Her" refers to both the character of Juliette Jeanson, interpreted by Marina Vlady who is literally introduced by her real-life name, and the city of Paris, the societal environment that encapsulates this massive collage of lifestyles, differing lines of thought and perceptions of society, language and existence. This coexistence between these differing beings is what exalts the dignity of the condition we have of socialization as the rational beings we are.

"Her" progressively becomes a duality between a "typical" individual, being this case represented by a middle-class housewife, and the city of Paris, the collective side, as several stories begin to intersect the narrative stream. This progressive transformation of the film tone mirrors the transformation of the city, which can be easily extrapolated to Europe. Everything escalates. Several criticisms to totalitarian regimes and consumerist tendencies raise to the surface, as the film condemns the policies of class division, the loss of oneself's identity and the superficialities in the artifacts of consumption... the modern Marketing creating new "needs" instead of satisfying the basic needs. Truth is, if they are created, they are not "needs", but whimsical machinations of leisures.

The interaction between language and images keeps increasing in the director's body of work. Ideas are stated without hesitation, but without pretention either. The validity of language as the limits of our world and how our language allows us to finish our world is discussed. Along these consumption trends, characters interact through a lens of a dramatized documentary, which has been called "exaggerated", but I do dare to call it "authentic". There is an increasing transmission of mutual realization in the structure. With this intentionally impressionistic cohesion between language, images, and even style, Godard focuses on what he intends to transmit, using the societal background as a favorable tool, and dismissing secondary plot and style devices that would only result in the detriment of his credibility, either reiterating points, or causing confusion, factual mistakes that he did in the past.

With this dramatic style that utilized the everyday routines of people living and/or visiting Paris frequently, we get a full collection of human characters, easy to empathize with, and eager to talk... or maybe not, out of fear, which is equally fascinating. How paradoxical it is that efforts like Made in U.S.A. or Le Mépris (1963) felt like overstuffed turkeys from a thematic point of view even if the amount of themes to discuss were narrowed down, whereas with this amazing masterpiece, Godard allows himself to talk about, well, everything without the product feeling oversaturated.

The Bakery Girl of Monceau