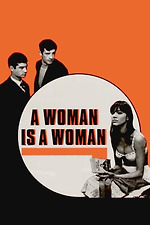 A Woman Is a Woman

Nouvelle vague acquires a significant meaning again, and French auteur Jean-Luc Godard is the mastermind behind the camera. Une Femme est une Femme is basically his third feature after the three-year delay of his film Le Petit Soldat (1960) had to go through, and it is also an intelligently precarious portrayal of reality. Godard attempted to construct a sexually-liberalist neorealist experiment so he could express his perception towards the mysteriousness and eternal secrets that involve comprehending a woman through a contradiction of terms. It is impossible to build a neorealist musical in its literal form just as it is impossible to comprehend the actions and thoughts of a woman, especially when her particular beauty, both physical and spiritual, surpass our blind, male judgments and impulsive acts. Ultimately, it is another tribute towards the most famous American genres, thus becoming a musical film in the least conventional sense. It doesn't really matter what point of view the film is subject to. A true fact is that Godard is back in his most scandalous, audacious and joyous form possible with a celebrated film that awakens the deepest mindless passions of a man and the everlasting ego of a woman without insulting any of those races.

Une Femme est une Femme funnily deals with Angela, an exotic dancer who eagerly attempts to convince her boyfriend Émile to have a baby with her. After the response she receives is pure mockery and rejection, she is torn between him and his best friend Alfred, since Alfred is in love with her. The results unfold in an extraordinary display of surrealistically comical events regarding their particular passions, forming a rather unusual love triangle. The film was greatly received at the Berlin International Film Festival of 1961 with Godard winning a Silver Berlin Bear and Anna Karina winning another one for Best Actress. Godard was also nominated for a Golden Berlin Bear, losing it against Michelangelo Antonioni's La Notte (1961).

Une Femme est une Femme plays with the musical genre, consequently questioning every single element portrayed in Hollywood musicals of the time. This questioning is clearly illustrated with the overabundant, stereotypical portrayal of the woman through the constant interruption of the music displayed, like if the colors of different lights, the colors of the set decoration and the music had lees importance than her mere presence. These elements dance to the cinematic rhythm, accompanying her presence on screen and shutting up when she starts to sing. Effectively enough, these constant alterations of colors and music contrast with the undeniable ugliness and tension of the pre-matrimonial situation she has decided to be involved in: the decision of having a baby. The lack of interest of her boyfriend towards her particular desires is a common topic among couples. However, this difficult-to-treat issue is not a complicated task for Godard. The most important part of his overall perspective was to assign the similar unrealistic, glamorous roles that could be found in a Gene Kelly film or in a musical of the 50's with Leslie Caron (An American in Paris [1951], Lili [1953]) to the cast and transforming them to real-life characters that the majority of the audience could relate to.

The omniscient direction lacks a narrator. It is not a necessary complement to illustrate the comedic ideas of the film. It lets the actions flow by themselves, once again, in an unexpected way, adding intertitles in sequences of silence to clearly explain the current thoughts of the characters, such as cinematic literature. This, of course, does not diminishes the importance of women and their influence on a bourgeois society, nor insults men that are in an abrupt state of hypnotism because of a woman's physical attractive. The love triangle, conformed by an extraordinary and already-popular cast, represents the artistic, the narrow-minded and the superficial sides of an individual's personality. They complement each other, even against their own will, unwillingly participating in an intentional parody of marriage... a marriage that hasn't even taken place yet. Anna Karina brings an extraordinary performance and her character could be interpreted as the symbolism of a woman's inability to take decisions of her own against an authoritarian and manipulative man.

Most of its parody-related feeling comes from the characters' constant false decisions and the way the subjectivity of the term "beauty" is handled. The longings of the characters may accomplish an ambitious extent, yet they inevitably live encapsulated in a limited reach of possibilities and consequences as implicitly explained by the apartment, an ultimately physical space. The screenplay is masterfully written. Some scenes may have been originated out of the blue inside Godard's mind, mirroring the improvisatory nature of life itself. It doesn't portray musical numbers under the excuse of being a musical film. It just presents humor in an effectively random way, sometimes without eluding the subgenre of slapstick comedy. Godard's love towards cinema is still present, making constant references to movies such as François Truffaut's Tirez sur le Pianiste (1960) and Jules et Jim (1962), and Jacques Demy's Lola (1961), films that had not even been released yet, sometimes featuring famous cameos.

Une Femme est une Femme is a provocative jewel of the French New Wave, not necessarily constituting the best and definitive sample of it, but certainly being a clever twist of a considerably popular genre. It celebrates cinema and the people behind the curtains making fun of the human condition under a terribly influential circumstance: love. Love and all that is around it gain cinematic life through vivid colors, a quick editing, a splendid cast, a witty screenplay and a stylish portrayal of the streets of France, a city that hides the mysteries and gossipy of endless different stories of its inhabitants. Improvisation and happiness are the main ingredients of this unusually characteristic magnum opus, but auteur Jean-Luc Godard achieved to obtain cinematic recognition thanks to only three masterful films... and he was barely beginning. So what if it parodies to a cathartic extent? So what if a delicious suburban satire is the dish of the day? Godard strikes, films and laughs through his cinematographically influential lens. Colors conquer the screen and guffaws propel through the air. Don't feel guilty about it. It is natural. It is in you. If not, what else?

Knife in the Water