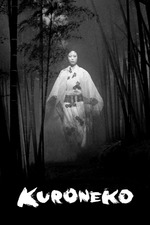 Almost reaching the level of Kobayashi's Kwaidan (1964), Yabu no naka no kuroneko is a flawlessly shot, edited, lit and directed piece of cinematic art which appreciation has partially suffered when seen under the light (darkness?) of Onibaba (1964) instead of under the frame of reference of the Nūberu Bāgu and cinematic horror deliveries contemporary to Shindô's supernatural, horror-oriented craft.

Its excellence is first noticed in Japan's most pervasive and constantly remarkable visual feature since the 50s: an otherwordly, deliciously composed, perfectly timed, symmetrically-looking, pristine black-and-white cinematography. Japan and the Soviets had the best cinematographers ever: end of story. Shindô constructs a perspective that becomes metaphysically omniscient, like a contemplator of events from a larger scale than that which a human is granted. Panoramic views make sequences become grand-scaled instead of minimalistically voyeuristic, although bravely, it shifts to that perspective from time to time. A stunningly bamboo forest cannot prevent from being penetrated by sun rays despite its stateliness, nor the sequences of darkness can entirely neglect night light for ever participating because, just like the existential necessary duality between "good" and "evil", darkness requires light both to exist, but also to present its contrasts.

Yabu no naka no kuroneko excels at creating an atmosphere, which almost become tangible, intoxicating; you can almost be engulfed by the smoke surrounding the two aesthetically-looking female ghosts that constantly reminds us of how they died. Atmosphere is such an important element for the construction of horror which often gets dismissed nowadays, and this film is aware of it, having excellent editing techniques that heightens our senses as an involuntary defense mechanism. Seriously, the first 25 minutes are so haunting! In that way, both Onibaba and Kuroneko are very scary films; I confess that three scenes in the movie made my stomach hurt out of fear (you know that sensation) without ressorting to cheap jump-scares.

But what have I said many, many times before about the Nūberu Bāgu movement before? It never stays within the conventionalisms derived from the basic curriculi of their genres. They go beyond, treating other topics that appeal the heart and soul, and throughout we witness a war-torn barren land, brought to its knees by the Heian period of Japan (it's a misconception to attribute its time setting to the Sengoku period). Themes of everlasting love fighting against evil gods and the forces of hell, the Egyptian black cat as the earthly connection between the physical world and the underworld, the rise of the samurai class (again from the Heian period), patriarchy, and family love are topics that assault the heart, making this a very complete tragic drama that starts with an act of injustice and ends with a cliffhanger note of possibly eternal torment.

What a bold picture. It is not a complete masterpiece, but it ranks right there among with the influential horror films that the world received as a legacy.