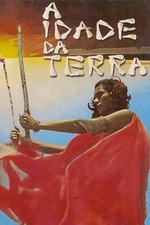 #2 out of 6 recommendations by Twitch followers

For all eternity, we shall always keep in mind that Rocha, one of the two greatest philosophers in Latin American film history, was the one that marked the works of Jodorowsky. Both are titanic revolutionary juggernauts: loud, orgiastic, messianic and counter-political beasts. This is the only decade I can specifically pinpoint, however, in which I can identify Rocha's output surpassing Jodorowsky's work in the same decade; their ideas were alternate hypothesis on the terrains of the so-called Third World, a capitalist categorization by definition.

A Idade da Terra opens with an impressionistic and cacophonic decomposition of what could have been the conclusion of Pasolini's Trilogy of Death through the depiction of an orgy of life, very similar to the hypothetical ideas explored by Ferrara in his take on Pasolini: a figure travelling the world in search of divinity by following a star. This is all, of course, a hypothesis of his transcripts, but I get the idea from Rocha the giant that his swan song, as a hypothetical conclusion of an unfinished and equally furious auteur trilogy, stands for what could have been the conclusion of said trilogy even if only the first part saw the light of day.

This metaphysical essay on earthly terrain employs capitalist and socialist dialectics for then proceeding with a Chytilová exploration of Brazil, a dissection of the traditional vs. the modern, the preconceived sociopolitical conventionalisms vs. the necessity of a revolution that results in the Proclamation of a Republic, in spiritual and anticapitalistic freedom, in individual and collective independence for "nosso povo", our people.

This is also, I dare to say, the most Brazilian film ever made. The stamp of a nation is imprinted into every aggressive frame when it is not being didactic; it interprets humanity through very national eyes and I find that astonishingly beautiful and personal. The Christ figures advocate for different masses but there is a common denominator: the people's rejection of Christ because of fear, even in the most "civilized" spheres of societies. Visually, it is an assault to the senses and an almost unequalled concoction of conflict and paradox, dissonant, experimental, even metafilm, but everything so comprehensively coherent.

Carnality will always prevail as long as there is not a divine mediator.