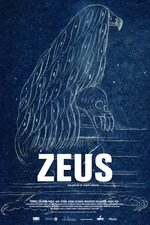 Joel doesn't practice falconry. Falconry is his entire life. That and living with his neurosurgeon, widow mother. His falcon is named Zeus. Zeus is quite good at what it does. He loves Zeus consciously more than he loves his mother. With a fractured family background and a life entirely devoid of social interaction, but in the middle of a sick, psychologically codependent relationship with her mother that has mostly shattered his future prospects as an independent human being, thirty-three-year-old Joel is striving to find a place in the world that goes beyond the stunning natural landscapes of falconry. A series of events in his life, including the active sexual life of her mother (involving none other than the director's real life father), allow him to consciously situate himself and his current isolated condition in a brutal and desperate manner.

Images and music are associated with the emotions of the film proportionally to the suspense build-up of the entire menacing ambience. With sporadic audiovisual attacks of aberrations, the debut of promising Mexican filmmaker Miguel Calderón is an unconditional attack to the senses of an audience unaccostumed with the prolonged appreciation sequences and the slow pace, the latter being deeply rooted in the psychological. The essay further develops into the great challenge that represents breaking old vicious circles when they have been not a part of your life, but your entire life.

The ending is one of the most abrupt you will ever witness, more than anything Godard ever did, and such ending speaks books about the human condition regarding maternal (or parental, in any case) codependence and breaking existential impermanence. This was a huge surprise for Mexico, a very difficult audience that easily condemns this kind of unusual narrative, but very rewarding for those seeking and even encouraging diverse forms of experimentation.

To mix additional notes to this review, I'd love to point out the brilliance of putting Zeus as the title of the film: a falcon, a symbol of fierce independence and freedom, soaring the skies in search of earthly prays. The falconry scenes are almost as good as those in the Hungarian classic Magasiskola (1970), but the falconry represented here carries a connotation of dependence towards the owner more than any political association of dictatorship. When the plot point of the film arrives, it is then when not only Joel is reflected into Zeus' state of domestication in search of independence, but that of her emotionally dependent mother as well. At the end, it is a film about emotional chains and the conscious decision by people not to break them, but to remain attached to them, like a prison of the mind.

Unquestionably among the freshest films of 2016.