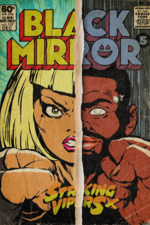 "Like the physical feeling of it? It's more sort of... satisfying. Like, one's a guitar solo, the other's a whole fucking orchestra."

season 5 babey!!!! i think black mirror's been getting a bad reputation, becoming known as the show whose plotlines are all "durr hburr technology is bad fire is scary thomas edison was a witch" but i think it's probably the most engaging and emotionally appealing piece of sci-fi that we have today; it doesn't need to be loud and aggressive to make an impact. it's a show where technology is a means of exploring the intractable human condition. we want to be able to do a thing, we finally get the ability to do that thing, and now what? that's the true spirit of black mirror, and that's what i love.

this episode hasn't been that popular among viewers but i honestly really liked it. it's the rare black mirror episode that is straight up about sex. it is! are you the same person online as you are in real life? where is the line between cheating and not cheating? can you separate sex from love? is monogamy even realistic in the first place? these questions and more answered, or more accurately just explored, in Black Mirror: Striking Vipers!

so far black mirror has only had two episodes explicitly about same-sex relationships, and i think this one dives deeper into the complications of societal expectations. unlike san junipero where yorkie and kelly have all the time in the world to kill, danny and karl only galavant around in a virtual world for a very short period of time before they have to return to their lives, with careers and families to uphold. this external conflict creates a much greater tension when they begin to get involved with "each other"... sort of.

i also appreciate that they utilized video games--one of the most aggressively masculine forms of entertainment technology--to deliver a story about people who are experiencing instability in their gender and sexuality. very subversive, very tasteful.