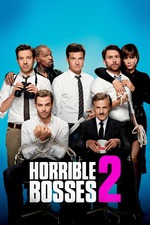 Shame that this has been getting more poor reviews than I would have liked for it to have gotten, because much like 22 Jump Street, it's exactly what a comedy sequel should be: self-aware. As you already know, if you've seen the first Horrible Bosses, the primary cast work extremely well with one another and bounce off of one another's line deliveries perfectly. No complaints about any of the performances; all of the actors kept me laughing consistently throughout the runtime. Most of the reason why this film succeeds in its humor though is because, even though it's not the most "intelligent" humor (whatever that even means), it's fast paced, it's clever, it's absurd and it's uplifting. It's definitely a movie that I'd turn to if I ever needed cheering up. It doesn't have as many memorable scenes or lines as the first one, because it's an almost entirely different film (more creatively constructed, a thicker plot, more thrills/actions, even some solid plot twists), but it's almost just as good as a whole. I enjoyed it, and I recommend it (mainly to fans of the first). I fucking love Jason Bateman.