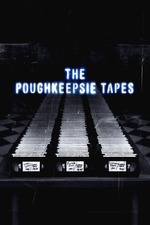 Even though it did.

In the words of Cheryl Dempsey:
I don't know what you want me to say.

I really don't. Never before has a found footage horror film seemed so real to me. I don't know, and I don't care, if you've seen this film too, and you're laughing at me because you were able to withstand it better that I was, write it off as "just a film" and go about your day... I can't.

I know it wasn't real. OBVIOUSLY it wasn't real, but it replicated life in such a way that I find more disturbing than most other found footage horror films. Here's the thing about The Poughkeepsie Tapes that really bothers me...

I watch lot of non-fiction television. Crime shows like Dateline, The First 48, etc. You know what I'm talking about. What The Poughkeepsie Tapes did so damn well is it didn't just master the "found footage" genre, it mastered the non-fiction documentary television genre. It is shot, edited and directed more like a work of non-fiction than any other film I've seen attempt to do so. And that really got under my skin.

I'm reading all of these reviews on Letterboxd that denounce this film as goofy and unrealistic, and I'll tell you, I WISH it had that effect on me. I WISH that I wasn't so creeped out by this film. I don't know, maybe it was because I was pretty damn drunk when I watched it, but I said it once and I'll say it again: