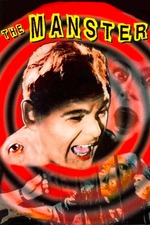 Strange late 50s science fiction offering about American reporter Larry Stanford who is sent to Japan to interview a scientist. The scientist ends up drugging the reporter and injects him with a serum that slowly has a monster come out of his body. While the film is a fairly routine piece of business from its time period with a common trajectory of the "ordinary man" who comes to terms with his own animalistic nature as the result of an experiment gone wrong (somewhat reminiscent of Paul Landres' underrated 1957 horror film THE VAMPIRE), it is a bit bizarre in its race subject. As the serum takes effect, Larry is vocal about his frustrations with the nuclear family and dead-end nature of his career back in America, finding pleasure in the more laid-back or unpredictable nature of the "sake and Geisha girls", and the idea of man "unlearning" the ideas of civilization (a subject from Jack Arnold's MONSTER ON THE CAMPUS the previous year) is perfectly apt to study without the weird racial scapegoat of its Japanese characters.

Monsters effects are quite fun to watch development, most notably an eye that Larry spots on his shoulder. On that level, THE MANSTER is quite a well done film of its genre, teetering just enough into the realm of the interesting to almost go a few touches beyond. But its odd inclusion and decision to scapegoat its Other as an influence in Larry’s animalistic desires showing themselves does leave an odd taste.

The Return of the Vampire