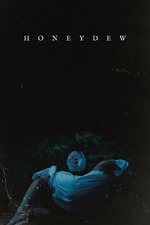 Well, the title was food 🤷‍♀️ And it is kinda about food, but what is the titular honeydew? (It's people! Honeydew is made from people! I guess?) More like HoneyDON'T ahahahah- look, I'm not here for bashing small indie films. I hate doing that. I have no qualms going in on the latest big budget mess, but a small film is probably someone's labour of love and I feel that. So when I say I hated a film like this and found it to have no redeeming value, you know I have no choice.

If you think Troll 2 or something is the worst movie ever, Troll 2 is a delight. This was a miserable experience I couldn't wait to be over. The people are all nails-on-a-chalkboard unlikeable. The score sounded like giant insane squirrels in your kitchen and I hated it. Horror can be off-putting in a good way, but this was the bad touch. The bones were here for a creepy backwoods flick, it's just - WE GET IT, OLD PEOPLE ARE CREEPY! WE GET IT, FARMS ARE CREEPY! It's a similar issue I had with The Dark and the Wicked but so much worse (and I didn't like that one either). At least it wasn't annoying though. Old lady making random old lady noises! That's scary right? If they show her ass I am shutting this thing OFF (they don't, but you know they considered it). Did you know old timey TVs show nothing but the all Popeye channel?

If you name your sweet baby son EULIS, you know you're dooming him to be a backwoods cannibal. You know that, right? I think we hit Peak Creepy Old People with The Visit. That movie worked because they weren't just creepy for creepy's sake, there was a story. A reason. And I liked the kids. This was just a lot of noise, and that couple couldn't be turned into a fruit platter fast enough for me. 😬 🍈