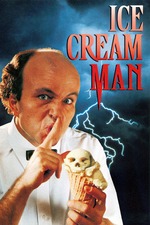 me: I'm gonna watch these all in order this month!
1st movie: *is 123 minutes long*
me: sonova... okay, Rifftrax of a dumb Clint Howard movie it is!

"It's Air Bud's loser brother, Clint Bud!" I freaking hate when they kill dogs in movies, but it was almost worth it for that riff. Besides Howard, this stars Jess from Black Christmas as "a Far Side character," an American Werewolf Not in London, a first baseman for the Dodgers, the loser son of a famous actor, and David Warner. We're just one Joe Estevez, Cameron Mitchell, and Dead John Carradine away from filling out our bad horror movie bingo card!

This is a reasonably fun bad movie, though I probably would have lost patience with it faster without the Rifftrax. It's buoyed by Howard's creepy performance and a cool sort of pastel suburban ice creamy aesthetic. I could have done completely without the mental ward sequence, it added nothing and was just unpleasant. I mean, unpleasant in a different way than bug and eyeball-infested ice cream. You don't have to say "happy days" 4000 times, we KNOW he's Ron Howard's brother.

This is also a Kids Adventuring on Bikes movie; I think it's meant to be a parody of stuff like The Goonies. (So in 2019 it kinda works as a Stranger Things parody. Visionary!) The visual gags work pretty well but the writing is... not good. There's a scene where the cops yell "Freeze!" at the Ice Cream Man and I laughed, but I have no idea if it was an intentional joke or just a happy accident. It's that kind of movie. But there are comically oversized ice cream cones with human heads in them, so what more do you really need?

(Also, the synopsis for this is wrong. Not one "unappreciative brat" is "reprocessed into the flavor of the day." Only adults are killed, unless I missed something.)