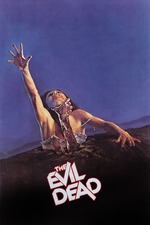 Ellen Sandweiss, Betsy Baker and Theresa Tilly make it look like it was a lot of fun to be covered in gross makeup, channel your inner demon, and run around terrorising Bruce Campbell and his annoying friend Scott. Which is actually an impressive and not-as-obvious thing to do, given that none of the women seem to have ever been particularly into horror (as they repeatedly make clear in this interview) and, most importantly, that it was a hard shoot—as Sandweiss says in in this other interview:

My experience making The Evil Dead was mixed. Of course it was exhilarating at age 20 to be off making a feature film, and the “boys” [Raimi, Campbell, and producer Rob Tapert] were a lot of fun. But the budget was tiny, and it wasn’t a union film, so the conditions were harsh and everyone on the set was very inexperienced. We were all in our early 20s and for many it was our first experience making a feature film. At the Tennessee cabin where we shot most of the film, we had no electricity, no plumbing and no running water—need I say more?

A scene no one seems to talk about is the one where Ash gives Linda a necklace (viewable in full here)—a lovely little island of romance in an otherwise relentlessly horror-y film. The music, the close-ups, Bruce’s cute idea of pretending he’d fallen asleep with that little box on his knee in the 10 seconds Linda had been out of the room, but also his inability to resist opening in them when she’s not looking at him to see her reaction to the whole situation. It actually made me wonder if it was a shot-for-shot tribute to some classic Hollywood film that I hadn’t seen, but as far as I can tell that was not the case.

part of Hooptober 8 All the Other Challenges, Only the Bones Remain