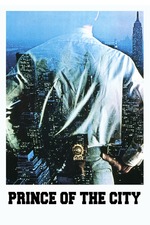 Prince of the City

Sidney Lumet's mise-en-scene is second to none. The lighting in this film gradually changes as this film meanders along. At the start the characters are under dark shadows with more focus on the things around them, a crowded bookshelf, a busy courtroom. But, as the story moves along and we are thrust deep into a web of police corruption. The focal point is on the characters who are no longer dark figures, they are well lit, bringing them into the spotlight, with little to no detail on their surroundings, plain white rooms, a near empty courtroom at the end. This is aesthetically one of Lumet's most pleasing films. It's perhaps a touch too long but really it's as close to a masterpiece as I've ever seen.

Is there even a bullet fired in this? Or a punch throw? One of the most gripping, non-violent crime films I've seen.

Prince of the City is the thinking persons Serpico.