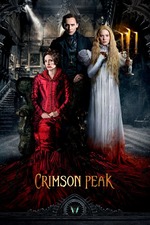 Deliciously detailed and melodramatic, Crimson Peak is Guillermo Del Toro's self-referential, horror-inflected gothic romance. The ghosts are a metaphor for the past, as the heroine Edith (Mia Wasikowska) tells us, as she writes a "story with ghosts in it."

This film is a love letter to the past. Filled with references to gothic literature (an admission of love taken verbatim from Jane Eyre) and traditional film techniques (repeated uses of iris shots that will either delight you or make you roll your eyes), Crimson Peak plays with a conventional plot so as to revel in details. This is fairly typical of recent Del Toro - while this film is vastly different to Pacific Rim, both contain simple plots that stand out because of the style and attention to detail that the director brings to them. There are also the striking moments of violence, which, while far and few between, break the viewer out of their expectations as to the gothic stylings of the plot.

While the plot deals in clichés, the audience is left to thoroughly enjoy themselves. Jessica Chastain and Tom Hiddleston seem born to play twisted siblings Lucille and Thomas Sharpe, Hiddleston the archetypal Byronic hero and Chastain his bitchy female mirror.

Edith is our pure heroine, her blonde hair and yellow clothes a direct contrast to the darkness of Lucille's look. This dichotomy, once again, draws from gothic literature, and while these two women seem to fight for the man of the three-piece, it is also only them that hold power. Thomas seems almost an incidental character when it comes to the final showdown.

The set design and costuming in this film are worth the watch on their own. As Thomas remarks, the house "breathes", and as the title betrays, is a character all of its own. It is the striking stage of the Sharpe's evil-doings, with it's audible aches and bleeding walls and teeth-like doorways. It's a perfect gothic setting, but like the ghosts, is more an aid than a foe to the heroine, and allies itself to her against it's cruel owners.

In Crimson Peak, style and substance are one. It's campy gothic romance, lovingly decorated in a palette of red, white and yellow.