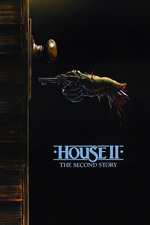 I hadn't seen this one since it first came out on video. My memories of it were not kind, largely because the original House was one of my favorites as a kid, and this fell far short. To be honest, if you had asked me before the rewatch what I remembered about it, all I could have told you was that it had a weird puppy/caterpillar creature and John Ratzenberger sword-fighting Aztecs. If you'd asked me if it also included undead gunfighters, pterodactyls with a fetish for crystal skulls, or Bill Maher as a slimy record producer, I would have just stared at you blankly. After watching it on the big screen with an audience I feel a little more kindly towards it, so I'm bumping up my review a whole half a star. I still feel like the comedy bits fall flat more often than not, but I found myself really liking Charley, the sidekick character, for some unknown reason.

I also won a House II comic book and poster, as well as two free passes to the Alamo Drafthouse for knowing that the only real connection between House and House II is that they both featured Cheers actors in cameos, which may have also helped my positive feelings.