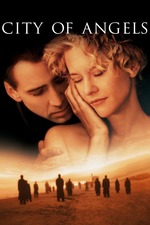 Even I didn't think this film would be lazy enough to actually play 'Angel' by Sarah McLachlan over a sad montage. That's a special kind of not giving a shit.

I wasn't expecting to be too impressed with any Hollywood remake of Wing of Desire. It's not even really worth comparing to Wim Wenders' beautiful fantasy. This is a bastardised reimagining, taking an ethereal tale about the beauty of humanity and turning it into religious messages masquerading as a soppy romance. Something frequently feels off about the whole thing. Despite its apt name, L.A. doesn't feel like the best city to tell this story of angels in. It's a flat landscape, and the swooping helicopter shots give little impression of these angels' existence. Nothing is done to make their perspective of the world apparent. It means the impact of later scenes, celebrating the wonderful things about life, are dampened, as there really isn't any noticeable difference visually. The rules of the fantasy also aren't clear, and it tacks on a bunch of talk about God and predestination that feels at odds with the talk of free will. I suppose on some level it's commendable that it doesn't try to copy absolutely everything about Wenders' film. But what we end up with is a muddled romantic drama, imitating a conceit from a better film without much success.

For all its shortcomings, however, it never once felt unwatchable. Ridiculously sentimental? Sure, but leaning into it well enough to make for some cheesy fun, if you're into those kind of films. The romance itself isn't actually terrible; painfully predictable and incredibly melodramatic (even for the 90s), but Nicolas Cage and Meg Ryan are compelling enough stars to make you invest. Their casting certainly raises eyebrows, and they have none of the soft charm of Bruno Ganz and Solvieg Dommartin. But the entire film is a radically different vibe anyway, and Cage in particular can teeter on the edge of bizarre just enough to make this heavenly romance charming enough to suspend disbelief. The two share an odd, slightly cagey chemistry (no pun intended), but it works. The acting is actually pretty strong across the board - Andre Braugher is a perfect choice for one of these angels, and Dennis Franz lights up most scenes he's in.

I wanted to like it a lot more, because some scenes can be genuinely delightful. It's just all over the place with its grasp of the themes and trappings of the story. There are certainly worse Hollywood remakes out there though - damning with fain praise, but praise all the same.