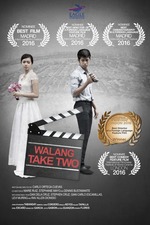 At the beginning there is a scene where a dwarf steels am huge man´s wallet. O had no idea what it was about. Then it seems as if these were cuts from a film project of a young egocentric script writer with directing ambitions who tries to somehow get PHP 10.000 (172 €) to start with his first movie.
“WAlang Take Two“ probably was a Low Budget production, but I didn´t find any information about it.
En passant the movie makes lots of jokes about the Filipinos: They are loaning money all the time, making debts, they are very creative with excuses, some sell their kidneys and mothers abandon their children with the words: “Wait for me. It´s for your future!”.
Instead of getting a job and earning some money, the new blood director goes to the money lender, looses the loan and takes an assignment to film a funeral. This has been done with lots of slapstick an partially funny, but very silly too. I liked the constant excuses that Hapi and his sister produce very quickly when they feel uncomfortable with a question, the most.
The camera is ok. The actors are obviously lay people, but ok. No need to watch it but it was absolutely ok.

In very good quality with lots of commercials: www.youtube.com/watch?v=IJRAj2wDE18