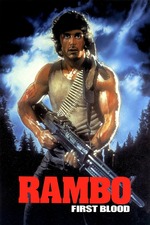 The work of Sylvester Stallone is often overlooked as grimacing, slurred action movies and the occasional misplaced dramatic performance in low budget shlock. What people often forget though is that Stallone is a genuinely impressive actor, and films such as Rocky or Escape to Victory showcase just how great a performer he is. I never thought it’d be Rambo: First Blood that would fully convince me of his abilities as a performer, but there are surprises around every corner in this action packed 80s classic.

Following Vietnam veteran John James Rambo, we follow the story of how Rambo is pushed too far and in turn reacts in the only way he knows, escalation of violence. We follow a cat and mouse game for much of the film, with Rambo stalking his way through the forests as local police forces look to catch and possibly kill him. What surprises me here is that, for an action movie, there isn’t all that much death involved. Rambo doesn’t intend to kill anyone, and the few lines of dialogue Stallone receives in the first hour of the movie make it apparent that he does in fact mean to leave in peace.

But the career opportunities that could be afforded to Sherriff William Tessle are too much to handle, and he coaxes Rambo as much as he can. Brian Dennehy is a great performer, and his role here is nicely matched with the overtly macho Stallone. Tessle is an everyday man, looking to make a blossoming arrest on a former Green Beret. The friction between Rambo and Tessle is very well showcased and for most of the movie they don’t even share the screen together. It relies on the two performances being at odds with one another and not needing visual reminders of the two together as to why.

Stallone’s performance and the simplistic direction of Ted Kotcheff is good enough to get us through a very short running time. There are a handful of scenes that look visually promising or engaging, but most of the shots are your standard action pieces that string together the adrenalin pumping highs and the underlying, tense lows. Kotcheff manages to capture the pacing rather well, and aside from and underwhelming finish to the movie, it is in fact the most fitting and believable of all. I can respect taking the film to believable places, rather than over the top explosions the likes of Commando thrived on.

Rambo: First Blood offers us a truly touching and genuine portrayal of a PTSD induced Vietnam veteran, and Stallone’s performance captures the right nuances of such a role to bring us one of his greatest performances to date. The action is strong enough to get through to the bittersweet ending, but there’s not enough of it to really call this a true action movie of the 1980s. It feels more like a light drama or slight action film rather than anything truly solid.