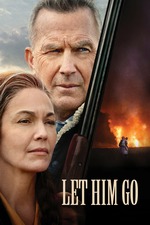 I don't know exactly if I wanted this to be pulpier or less pulpy, but I'd have taken either extreme over what we get. The movie keeps within the middle ground, and that gets frustrating. It presents as being slow and languid and thoughtful, hinting at the flaws of its heroes and the traumas that made them who they are. And then at other points in the movie, it simplifies things by making their adversaries almost cartoonishly evil. And the movie relishes the violence enacted upon them, really undermining whatever thoughtfulness it was holding on to up to that point.

So, I don't know. Costner and Lane play up an compelling dynamic. And around the edges, we get some vague but intriguing reckoning with what America is, the idyllic landscapes juxtaposed with what's been done to people and what's still being done. But in the end, it's all directed toward lurid resolution, advocating a kind of frontier justice that feels at odds with a lot of what happened in the rest of the story.