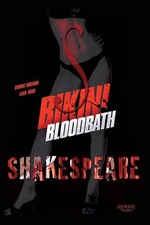 This is such a weird but great idea. John Reed (who, far as I'm aware, had no input into the original Bikini Bloodbath at all) took that movie and dubbed over it with a different set of actors reading lines from Shakespeare, that correspond as closely as possible to the original script.

If it were just a joke, it'd get boring really quickly, but it kind of works? You probably need to have seen the original to get all of it, but maybe not - it's just a silly slasher comedy, just now with different dialogue.

So, shrug? I've got no idea why it exists, and if I'd paid money for it I'd perhaps be a little less forgiving, but it's available on Youtube and is definitely worth a go.