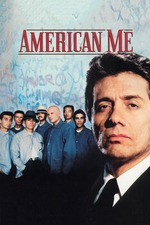 I tend to see Edward James Olmos on a cover or cast list and immediately lose interest.

Don’t get me wrong, this is technically unfair because I actually think Olmos is a very good actor, but I find he tends to show up in lame movies which waste his talent. I later noted positive reviews–and then that Olmos in fact directed this one. I was more interested now, since it’s better not to see someone with talent wasted, and surely he wouldn’t waste his OWN talent.

Inspired by the story of Rodolfo Cadena, one of the founders of La Eme (aka the Mexican Mafia), but fictionalizing elements (surprise, surprise!) of his life and generalizing things a bit, this is essentially just that, the story of a founder of La Eme. Montoya Santana (Olmos as an adult, Panchito Gómez as a youth) is a Chicano kid who grows up in “the Barrio” of East L.A., forming a gang with pals Mundo (Richard Coca, later Pepe Serna) and J.D. (Steve Wilcox, then William Forsythe) called La Primera. They take a shortcut through another gang’s territory one night and break into a diner–the owner of which happens to live adjacent and catches them, leading to juvenile detention for the lot, and a prosthetic leg for J.D. (thus building his correlation to the real Joe “Pegleg” Morgan, and explaining why a white kid is talking with a Chicano accent and is such a close buddy with a Chicano from East L.A.). Events there bring them all to prison eventually, where La Eme is really born and they begin to control Folsom Prison from the inside, the drug trade, prostitution, everything.

Essentially, the film functions as a vehicle for Olmos’ own interest in preventing and discouraging gang membership, which is a subject near and dear to him as he grew up in East Los Angeles himself.

He makes interesting choices throughout, with an actor-mounted camera during a depiction of the 1940s’ Zoot Suit Riots as the man is carried out into the street by marauding sailors. The soundtrack is composed of 1950s classics and 60s and 70s pop like a Los Lobos cover of “Shotgun” and Ike and Tina doing Sly Stone’s “Higher,” as well as a stirring, bombastic sort of score with strong, loud strings. The entire plot is told in flashback from Santana’s own narration, occasionally poetic, as he recounts the story of his birth all the way through the incarceration we first see him in when he begins telling us.

It’s not a movie that jumps up and kicks you, dramatically, nor is it one that you cringe through or restrain cringes through. The message certainly kicks you because it’s all very authentic. As much as we grow up with Santana and gain some kind of empathy with him, he never becomes a happy, positive role model–not even close. Even when we see him outside the prison, even when we see him with a woman he sort of cares about, even when he finally starts to accept some responsibility for his actions. It is acknowledged that the film is pretty brutal. It’s not gory, and it’s not quite Scorsese level brutal, but it is pretty dark, bleak and matter-of-fact about its violence and rape, which adds an appropriate air of authenticity to the whole affair, making for an interesting and good viewing experience overall, though not the happiest one in the world.

The Greatest Show on Earth