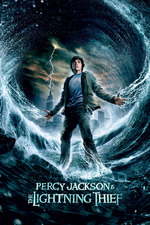 As a Percy Jackson fan this movie was painful to watch. This is one of the worst book-to-film adaptations i have ever seen. Of course there will always be people who say 'It's a good movie if you've never read the book' but as an adaptation the top priority should be entertaining the fans and you can ask any fan of Rick Riordan's work and they will tell you that this film does entertain them.

The first and most obvious problem with the movie is the casting. Now most of the actors here do a good job with their performances but many are horribly miscast especially the main trio. Some actors here do feel like good casting choices and makes me think that the casting director at least skimmed through the book. Pierce Brosnan, Sean Bean and Catherine Keener each do a good job bringing the characters of Chiron, Zeus and Sally Jackson respectively to life and I have no problems with them. However what really brings this film down is the casting of Steve Coogan as Hades, Uma Thurman as Medusa and the main trio. Steve Coogan is a great actor and comedian but he still looks nothing like the character and is written in a way that i think is trying to be funny but fails miserably because he is supposed to be playing a very serious role and I wonder why he was even chosen in the first place. Uma Thurman as Medusa was also a weird casting choice as Medusa in the books was described as a Middle-Eastern woman with a face that we never see because it is so ugly that it turns you to stone. Uma, despite having snakes for hair is definitely not ugly here (and also white) and hides her face with sunglasses instead of a veil which leads me to wonder why she was chosen as well. However the worst casting choices in the movie are hands down Logan Lerman as Percy, Brandon T Jackson as Grover and Alexandra Daddario as Annabeth. Again the performances themselves are not bad despite having to deliver some of the worst written lines i have ever heard ('' It's like high school without the musical'' and ''I definitely have strong feelings for you, I just haven't decided if they're positive or negative yet'' immediately come to mind) but they are way too old to play these characters. Percy and Annabeth were twelve in the first book and Grover (being a satyr and maturing twice as slow as humans) was 28 despite looking 14. This was done so that we grow up with these characters and see them mature especially Percy who is part of an important prophecy that will come into fruition when he turns 16. At the time of filming, Logan Lerman was 18, Alexandra Daddario was 24 and Brandon T Jackson was 26 and the characters themselves were aged up to 16. Do you see the problem here. Also Brandon and Alexandra look nothing like their characters from the book even if you ignore the age lift. Annabeth is supposed to be tanned with blond hair and grey eyes instead of pale, with brown hair and blue eyes. Grover now has a change of ethnicity with his hair colour and build also changed from a scrawny red-head to a well built brunette. However it's not just the actors that make a character fail, It's also the writing, so let's talk about that now.

The characters of Grover and Annabeth as well as Percy but to a lesser degree have been completely changed as characters. In the books, each character had their own motivation for going with Percy on his quest. Percy himself had to find Zeus' lightning bolt but was mostly on the quest to save his mother from the underworld, Grover wanted to redeem himself after failing on his last quest and getting another demigod killed in the process and Annabeth wanted to prove that she was capable to go on a quest after being stuck at camp for 5 years. This was done so that we understand them more and we can relate to them and their inner conflict. In this movie Percy's motivation is the same but Grover and Annabeth have no reason to follow Percy, they're just here because they're the main characters. Personality-wise Percy is the closest to his book counterpart despite not being nearly as snarky as his book counterpart. Percy's trademark wit and sarcasm is a main factor in what makes him stand out as a main character and isn't just a blank slate for the readers to project themselves onto. Grover is supposed to be scared of nearly everything but is still a loyal friend and the heart of the group. Here he is much more confidant and feels more like a generic comic relief character. Annabeth is supposed to be the brain of the group being the daughter of Athena and despite bickering with Percy a lot, the two learn t be friends. She has no personality here and instead we are told that she is smart but never shown it, she's just 'the girl' here. The story also was changed from the book, The movie is a treasure hunt film where the characters had to travel across America to find three pearls that would help them escape the Underworld after confronting Hades. The book was cleverly written as a modern version of classic Greek myths were are heroes are supposed to go on a straightforward quest but are constantly side tracked by monsters. Other problems with the story include cutting out characters like Dionysus and Clarisse, making Hades a villain, having Persephone in the underworld despite the fact that she's only supposed to be there in Winter, receiving the pearls at the end of the quest as a gift, The fact that the Gods are not allowed to their children and cutting out two of the main villains of the series, Ares and Kronos living only Luke who is not nearly strong enough to be considered a threat.

On a technical level the film isn't that bad which is why my rating is as high as it is. The story, while inaccurate still functions as a story and isn't a jumbled mess, the set design of Camp Half-Blood is very good and most of the CGI has aged very well after 10 years especially the water which is very hard to animate but some effects just do not hold up.

Overall there is no reason for you to watch this movie, despite not being well made it fails as an adaptation and only cared about making money from fans of other YA movies. I only hope that the Disney+ show is better than this and the only way to go is up