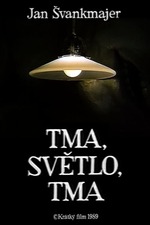 A stop motion film that preys on the inherent creepiness of the human body, the film being the slow formation of a human, with each new body part bringing a new sense of anxiety when it enters the screen. It never crosses into out and out horror, firmly staying in the realm of the uncanny valley, leaving you in a constant state of waiting for the other shoe to drop.

Though I guess there's a certain amount of fitting irony in the creation of man being the final shot of something bordering on a horror.

Godzilla: Planet of the Monsters