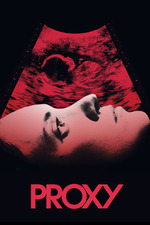 After first seeing Joe Swanberg in "You're Next" and then again in "The Sacrament", he appears again here. He has a certain comic flair which helps to add to the sense of fun which most decent horror tends to possess.

I've not heard of director Zack Parker before, but he appears to be no stranger to shocking subject matter. Yet strangely this seems less horrible than it might have been had it been an ultra serious drama. As a horror film this doesn't shy away from the disturbing content, but on the other hand with the clear intention of shocking the audience rather than seriously exposing genuine real-life issues it's not relentlessly miserable like a serious drama might have become.

I found myself reminded of "Fight Club", not just because of the inclusion of self-help groups, but also because of the shared theme of characters lured towards self-destruction. There's the same twisted edge to both films and I could easily imagine fans overlapping between these two films.

Still, I must admit that during the earlier part of "Proxy" I began to wonder whether it really belonged in a horror marathon at all. While there's a horrifying event towards the very beginning, the scenes which follow it seem very down to earth, more like a serious drama. Yet as the film progresses, the film simply becomes crazier and crazier. At the half way point things seemed to be wrapping up in a less then satisfying way so I was actually very happy to see that neat package explode into something wonderfully bizarre. The finale was beautifully nuts and utterly twisted. I want more horror films like this please!