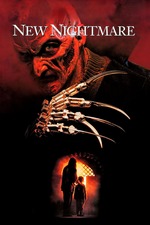 I want to like this one more than I do. I appreciate what they were going for with the meta aspects and a more threatening Freddy but it doesn't always come together so well.

It starts well enough with a build up before Freddy even really shows up but it falls apart towards the end for me. Things get a little hammy with Freddy actually trying to eat the kid (I wouldn't have objected to it happening by this point, mind you) and his long tongue. This isn't really out of place or character in context of the series but it just felt weird after the rest of this film.

The CGI was pretty bad in parts (the freeway sequence/Freddy in the clouds especially) too unfortunately. It's too bad because I think they did fine with the more practical effects.

In the end this was just good not great for me. I'm glad that Craven got a chance to attempt a meta horror film again with Scream.

My Soul to Take