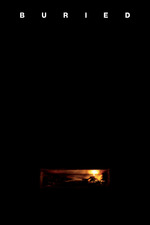 I heard a lot of this film and I was pretty excited to watch it. Though I did have doubts with Ryan Reynolds in the leading role as he is not exactly known to be an emotional and heavy actor. For the most part, this film kept me hooked and invested on the drama that unfolds and the stress that this character is suffering.

The film is written by Chris Sparling and I must say that he has written quite a thriller. I was always trying to anticipate what happens next and most of the time, it surprised me with something that keeps the film moving forward and gripping onto my interest. Dialogue may not be the most important aspect for a film like this but it's written so well in this film that I could empathise on his reactions in the conversations he has over the mobile phone. My issue with the screenplay is the moments that are found in the film, only in small doses, that felt cheesy or campy. This issue did not really affect me all that much but it is there.

The reason that this thriller was so well done was the direction of Rodrigo Cortes, who definitely prove that he can create something suspenseful and gripping without having to rely on recycled elements that plague many suspense/thrillers that are found today. It must have been extremely difficult to film a screenplay like this, so Cortes has carefully prepared himself and the crew with such precision in order to execute on what he has envisioned. Buried at times feel like a Hitchcock film and I thought that was a nice touch by Cortes, throwing a bone to the audience of his influences for this film. I am curious on the next few projects that Cortes will do as he may prove himself to be a entertaining and reliable director.

The film was shot by Eduard Grau. I can definitely say that he has done a good job for this film, as his photography was essential in capturing the claustrophobia and terror of being in that coffin. The use of glow sticks and a flame as a source of primary light is used well for this film and adds on to the tension that was established on the scene. I wished though that Grau and Cortes has confined all of the shots within the coffin, as some that go beyond the dimensions of the box and create this out of body experience. This technique may work for some but to me felt wrong and took away the tension that was being created by shooting with close ups and focusing on the emotional reaction on the actor's face.

The film's score was handled by Victor Reyes, who in my opinion did not impress me in this film. I am not saying his work here is intolerable but rather I felt that it distracted me from the tension and pacing that this film was going for. If Reyes took a more quieter and horrific sound for his score then it would have been perfect. Though his score did not win me over, it did get a grin from me as the main titles were playing. The score that was playing sounded like it was something that came out of a Hitchcock film like Psycho or Vertigo.

There is only one actor being shown on screen here and that is Ryan Reynolds. This man surprised me as he didn't feel over the top here and didn't make me laugh or cringe, which is the reactions that I normally feel when I watch him on screen. There were moments in this film where I truly was sad for the character and everything that he has went through. This film is definitely an example that showcases Reynolds talent as an actor. Dan Brenner is played by Robert Paterson, who symbolizes a sense hope for Reynold's character. The final words of the film that is said by Paterson was so effective that it's still in my mind right now and makes me want to watch it again just to understand the angle of this character.

Buried is an example of a great thriller and will keep the audiences invested until the very end. It may have it's problems but that is because I tend to nit pick, but these issue shouldn't hold anyone back from watching it.